4 Tips For Safely Removing Snow & Ice From Your Deck Surface 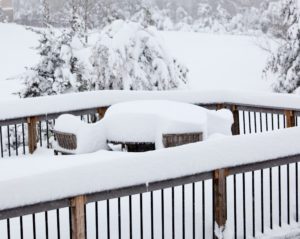 With winter upon us, it’s not uncommon to look out your window and see your outdoor deck area blanketed with a fresh coat of snow, and in order to prevent it from piling up too high and blocking you in your home, it’s going to need to be removed at some point or another. Removing snow from your deck isn’t a task that most homeowners look forward to, but it’s an important one nonetheless due to the fact that standing snow and ice can cause a great deal of damage to your deck if left in place for too long. With that being said, it’s important to ensure you remove the snow safely so you don’t cause any damage to your deck in the process. In an effort to help you do so, our team of skilled Ontario deck builders have taken the time to put together this short list for your reading pleasure that highlights a few tips you can employ this winter to safely remove standing snow and ice from your deck’s surface without causing damage to it in the process.

Don’t Use A Metal Shovel

First and foremost, when removing snow from your deck’s surface, you don’t want to use a metal shovel. As it is, shoveling snow off your deck can lead to scratches, and the likelihood of this happening only increases when using a metal shovel to do so. When removing snow from your deck, it’s always best to use a plastic or rubber shovel. Not only are these shovel options lighter than metal, making the task that much easier, but they don’t run the risk of causing as much damage to your deck’s surface if they accidentally come into contact with it. If you have no other option than a metal shovel, your best option is to ensure you leave a thin layer of snow between your shovel and the surface of your deck to keep it from coming into direct contact with your deck’s surface.

Shovel Parallel To Your Deck Boards

For Light Snow, Use A Broom

Even if it’s only a light dusting, it’s still important to remove any standing snow from your deck’s surface, and for lighter snow, you can actually use a broom to do so. For light, fluffy snow that’s generally less than 4 inches deep, it can actually be easier and safer for your deck to remove it with a brook as opposed to breaking out the shovel. This eliminates the risk of scratching your boards entirely.

Don’t Shatter Ice On Your Deck

If you’re looking for an Ontario vinyl fences and decks builder, give us a call today at 416-399-3163 or fill out our online request form.

"I have used them for both deck and fence work. They worry about the details and the quality of their work is second to none. I recommend them for any deck and fence project!"
- Thomas Kouroukis | Ancaster, Ontario
Read More

Alan from Modern Decks and Vinyl Fence installed my beautiful white vinyl fence and oversized gate in August of 2016. Everything was installed in two days, and it has elevated the curb appeal and also the value of my home. It is gorgeous. Alan was very professional and easy to work with. He gave me many options to choose from for both my fence and my gate.
- Laura C | Clarington, Ontario
Read More